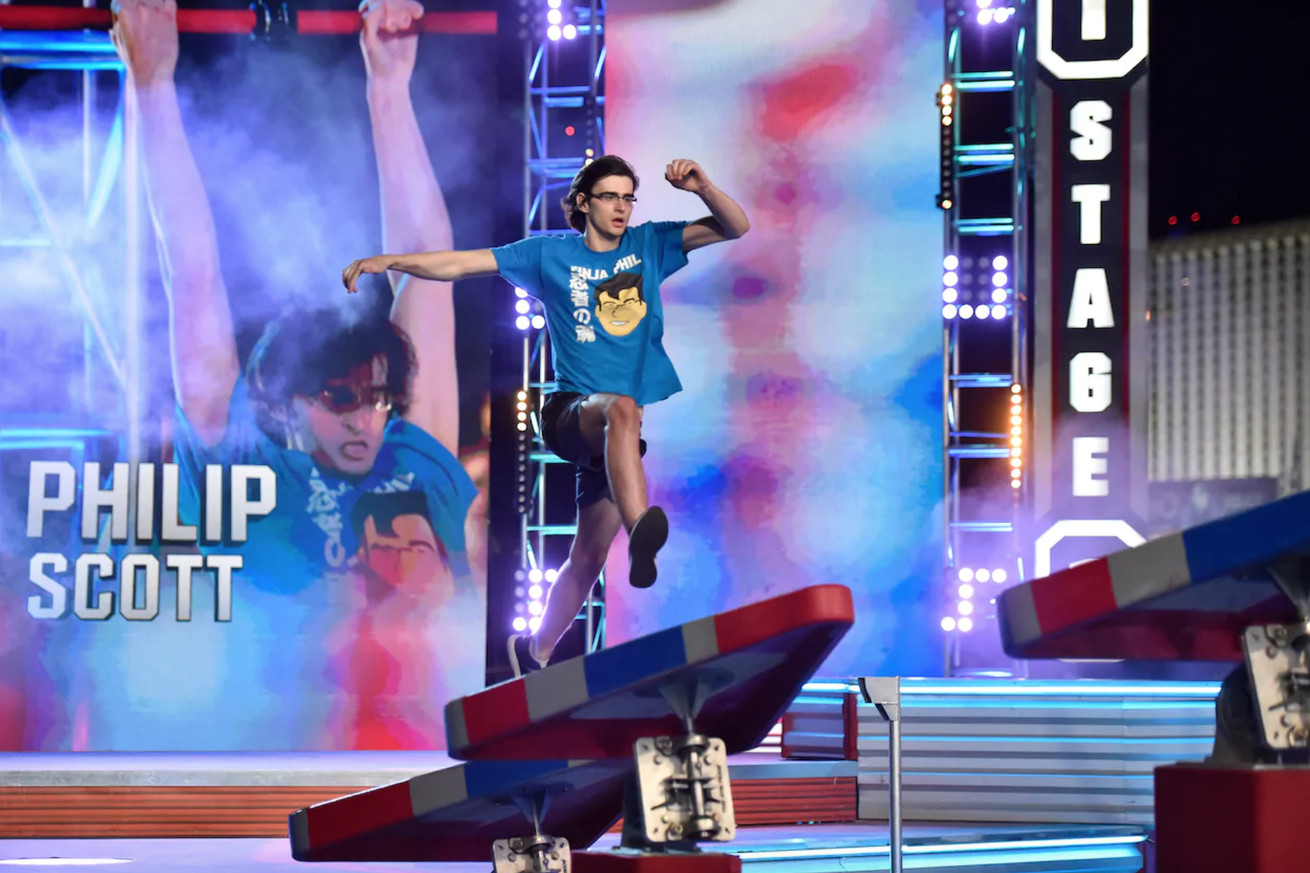 Philip Scott became an immediate favorite in his rookie season.

Philip Scott became an immediate fan favorite this year in his rookie season. He made it through the Cincinnati Qualifiers to the Cincinnati City Finals and though he failed on the Spinball Wizard, it was good enough for 9th place and a spot in the Las Vegas National Finals!

But he almost didn’t compete in the Cincinnati City Finals. After the fact, Philip told ANWN that he had “multiple panic attacks the day before my City Finals run. I called up the producers saying, ‘I can’t run. This is too hard.’ They were really nice, though. They were understanding. They were like, ‘We can help you. We can give you a spot away from everybody just to calm down. You can make up your mind, and it’s okay, whatever you decide.’ My parents helped me a lot. My parents were like, ‘Do you want your anxiety to win, or do you want yourself to win?’ I’m like, ‘I want me to win.’”

And we are all glad he did. Luckily, Philip was able to keep his anxiety at bay before National Finals. We caught up with him recently and he told ANWN that he “actually felt pretty good!” about tackling Stage One. “Vegas was a little overwhelming at times but I didn’t panic or have excessive anxiety. I think knowing I made it through my experience in Cincinnati made Vegas feel a lot less scary.”

How he became a Ninja

In 2009, when he was 12 years old, Philip was diagnosed with Asperger’s Disorder, a high-functioning form of autism. “The diagnosis didn’t change who I am but helped me understand who I am,” Philip explained.

He told HometownLife.com that is partially why he became interested in Ninja training. “Due in part because I’m on the Asperger’s Syndrome spectrum, I developed an obsessive interest in the Ninja warrior shows that the G4 network used to show from Japan.”

As a child, Philip wasn’t into sports. What intrigued him most about American Ninja Warrior is that it’s “like a real-life video game,” he said. “I had never been so captivated by a physical activity until I first saw Sasuke [the original Ninja Warrior from Japan] when I was 10.”

When he was 13, Philip started “hanging around at the playground, slowly learning how to do pull-ups and monkey bars. Not too long after, I started making up courses at the playground and my backyard, trying to recreate obstacles from the show the best I could.”

Then Philip met Chris Wilczewski when he was 15 years old. “His [Chris’] gym out in New Jersey was the first gym I ever went to,” he said. “He’s always been there for advice and encouragement.” So much so that Philip now works for Chris and the National Ninja League. “I manage the league’s website, and I also make a lot of graphics, including the logos,” Philip explained. “You’ll be seeing a lot more of my graphics at the NNL World Championships in North Carolina in February! Some of the things will include event programs, posters, and broadcast graphics!”

Training and tackling obstacles on the course

Philip told ANWN that he doesn’t do any traditional exercises. He only trains on obstacles and runs “courses in my backyard over and over for cardio… I do pretty much everything else at my gym [Gripz in Southfield, MI].”

When approaching a new obstacle or challenge, Philip analyzes each one and visualizes the movements in his mind. “It might be hard to completely put into words, but I just imagine myself on the obstacle. I try to figure out the most efficient way through,” he said. “I tend to categorize obstacles in my head by similar movements, so if there are any existing obstacles with similar movements or structures it’s very helpful to the visualization of an obstacle.”

He said that people with Asperger’s tend to “hyper-analyze anything of interest” so he encourages kids or adults with Asperger’s who might be interested in ANW to use that to their advantage. “Just keep trying and trying,” he says, “and thinking of what you should do differently each time you attempt an obstacle.”

Even though my first run on American Ninja Warrior wasn’t shown, I moved on to City Finals!!! I derailed the bar on the very last drop on Slingshot. It was so wild and such an honor actually being on the real course. I’m so grateful that I had my family, and 3 ninjas that I’ve admired since I was very young @reallifeninja , @chriswilczewski and @ryan_strat on the sidelines cheering me on. This has truly been a dream come true. Even though I wasn’t in this episode tonight, I’ve been informed that my City Finals run will most likely be shown when that episode airs next month!!!! Stay tuned!

The importance of a supportive community

Hands-down, the one thing we hear about the most is how supportive and amazing the ANW community truly is, and that has been huge for Philip.

“Without how welcoming and awesome the other ninjas are, I would have never been able to socialize the way I am able to now,” he said. “Also, even though we can all get competitive and intense at times, the sport of Ninja has the most sportsmanship I’ve ever seen.”

“Even though I’m one of the competitors now, I’m obviously still a superfan,” Philip confides. “I was internally fanboying just being at the course, and being among many ninjas that I’ve looked up to since I was pretty young.”

“Obviously, I look up to Drew Drechsel a LOT. I first met Drew eight years ago. He’s always been such an awesome role model and I’ve grown up studying his runs more than any other ninja. It was so great to finally compete at the same level as someone I admire so much. Obviously, he’s way way better than me—I’m seven years younger, so maybe I’ll be as good as him at 30 *laughs*—but the fact that I got to be on the same playing field was incredible.”

Then there are the “OGs of ANW, many of which are out there rocking it! Ryan Stratis, David Campbell, Brian Kretsch, Lorin Ball, Travis Rosen, and Brett Sims just to name a few. The fact I watched them on TV when I was just a dorky 13-year-old and now at 23 competing alongside them is incredible,” he exclaims. “Some of the more recent stars that I admire so so much are Najee Richardson, Sean Bryan, Adam Rayl, and Ethan Swanson.”

And then, he shared that “I don’t think I’ve ever been so starstruck as when I got to train with Jessie Graff at the local gym in Las Vegas!!!!”

Philip is working hard to improve his “mental fortitude” and build his confidence around competing. “I used to get so nervous that I’d throw up half the time before a comp! Now I feel way more in tune with the course and my results are showing,” he said. “I’ve won both of the NNL competitions I’ve been in so far this season. Even though I’m much more confident in my abilities than I was before I was on ANW, I know I’ll still get pretty nervous before I step up to the start line in ANW12. I don’t want a sophomore slump, so I am doing everything in my power to get stronger mentally and physically.”

I think I speak for all of us when I say we can’t wait to see how you do next year, Philip!