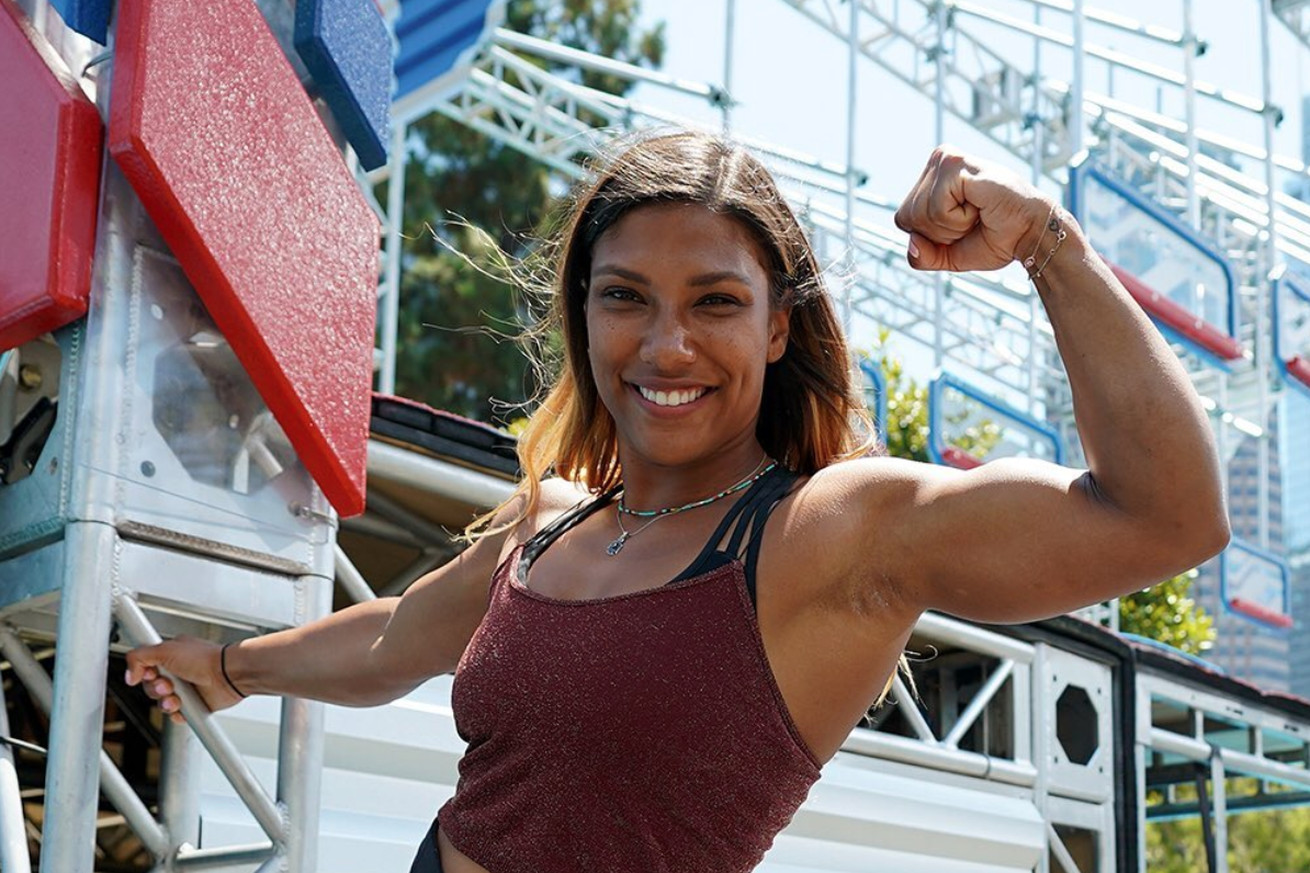 Meagan has been busy crushing climbing comps, modeling for Athleta, and spending quality quarantine time with her cat.

In season 11 of American Ninja Warrior, Meagan Martin competed in Tacoma. After falling on the 5th obstacle, she narrowly made it to City Finals. Unfortunately, the Lightning Bolts took out Meagan again, marking the first time she did not qualify or get a wildcard to Las Vegas for the National Finals.

In typical Meagan fashion, she took the disappointment in stride and later said it was probably better anyway, as she was dealing with an injury. In fact, she posted on Instagram that “Since Tacoma, I was able to start really taking care of my injury! I got PRP injections about a week after we filmed Tacoma, then I spent some time on crutches, and I’m still in the process of rehabbing. It’s been a few months and I’m happy that I had the opportunity to really work on fixing this set back that my body was having. It’s been quite a year, and I’m happy to say I’m more motivated than ever to come back next year and attack the course with a healthy body!!!”

So what has the Ninja been up to since last season?

She competed in several climbing competitions. In The Boulder Field Masters, she won not just a single comp, but the entire TBF Master Series.

So many exciting moments from tonight’s competition! Congrats to @meaganmartin89 for not only coming in Women’s first place for tonight’s The Modern Climber Competition, but winning the overall TBF Masters series! Thanks to all the competitors, judges, and volunteers for making our final competition one for the books! We will see you again next year! Photo by @lukewebstr Womens 1. Meagan Martin 2. Cloe Coscoy 3. Sienna Kopf 4. Thea Wulff 5. Mira Capicchioni 6. Maya Madere Special thanks to @blackdiamond and the rest of our sponsors for all their support @templecoffee @flashedclimbing @frictionlabs @walltopia @theboulderfield #themodernclimber #tbfmasters #tbfmasters2019

It wasn’t all about pulling on plastic, though—Meagan has been on some rock outside, too!

Back to Projecting!!! So happy to be able to get outside a few times this last week. Stoked to go back to this one and try hard! by Dave Wetmore @soill @organicclimbing @jtreelife @gnarlynutrition @frictionlabs @imbuilt

Meagan became a commentator with the ESPN broadcast team for the USA Climbing Combined Invitational, which were Olympic qualifiers.

I hope everyone had a great time at the @usaclimbing Combined Invitational! If you couldn’t make it, I hope you tuned into the @espn broadcast on ESPN3!!! Congrats to @zachgalla and @laurenmbair on their wins !!! Thank you to everyone who made this competition a successful event, it takes a village ❤️!!! Next up is Bouldering Nationals Jan. 31st-Feb. 1st!

She got in an Athleta photoshoot in pre-COVID times.

Here’s a photo from the last shoot I did with @athleta!!! I feel so blessed to have had the opportunity to work with this amazing brand! When I flip through the catalogue it’s a beautiful thing to see so many different races, body types, and ages represented in one place ❤️ !!! by @misha_taylor

Season 2 of #ANWJR premieres tonight at 7pm EST!!! If you watched last year, get ready to be even more impressed by all of the #juniorninjas this year !!! Don’t miss it! Only on @universalkids!!!

And spent quarantine with Bandit, her cat.

Meagan has certainly been busy! Hopefully, her hamstring is all healed up and we see her competing on American Ninja Warrior soon!